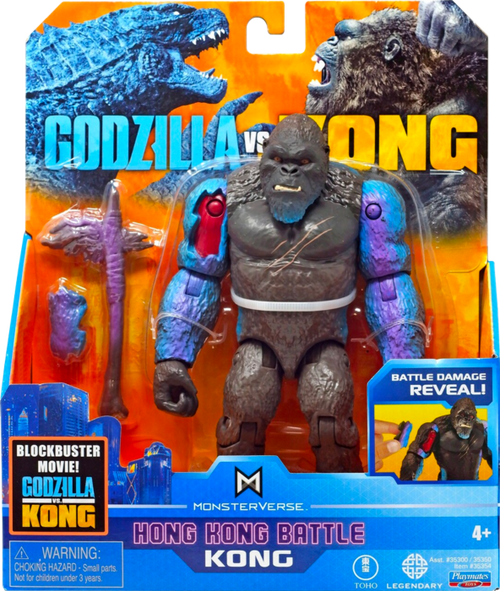 or make 4 interest-free payments of $5.00 AUD fortnightly with

In a time when monsters walk the Earth, humanity’s fight for its future sets Godzilla and Kong on a collision course that will see the two most powerful forces of nature on the planet collide in a spectacular battle for the ages. As Monarch embarks on a perilous mission into uncharted terrain and unearths clues to the Titans' origins, a human conspiracy threatens to wipe the creatures, both good and bad, from the face of the earth forever.

Coming to 6 inches in height and featuring numerous points of articulation, the Hong Kong Battle King Kong 6” Scale Acton Figure from Playmates is meticulously modelled after the ape titan from Godzilla vs Kong: Monsterverse (2021) as it appeared in the Hong Kong battle scene. Remove or attach the included battle damage accessory to make Hong Kong Battle King Kong look battle-worn. Also included is a weapon accessory, perfect for recreating epic fighting moments from the film.

Proudly brought to you by Popcultcha, Australia's largest and most comprehensive Godzilla online store. Click here to see our full range of Godzilla collectibles.