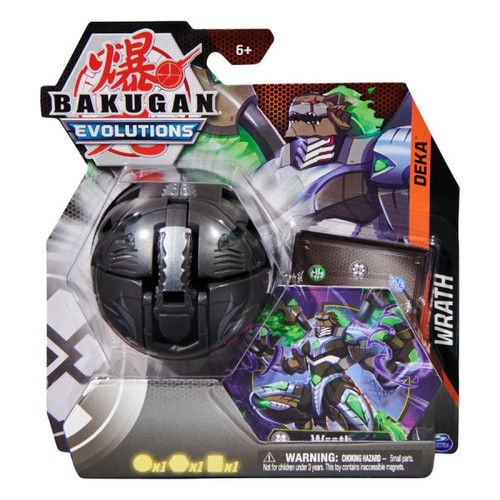 or make 4 interest-free payments of $8.74 AUD fortnightly with

Your favourite Bakugan just got bigger! Unleash the power of Deka Bakugan, jumbo-sized versions of your favourite Bakugan characters from the hit show (now on NETFLIX)! Transform your Bakugan by rolling them across their exclusive large Geo Cores (included) and they'll pop open, changing from a unique shape into battle-ready Deka Bakugan! Each Deka Bakugan features awesome details, its Faction symbol and a different transformation, bringing it to life. With so many characters to collect, including Blitz Fox, Colossus and Wrath and more (each sold separately), these large-scale, powerful Bakugan are ready for Baku-Action! Collect all your favorite Bakugan characters as seen in the Bakugan hit show (on Netflix). Do you have what it takes to emerge victorious? Take your Bakugan collection to the next level with the Deka Bakugan figures! LARGE COLLECTIBLE BAKUGAN: Deka Bakugan are the jumbo collectible versions of your favourite Bakugan characters! With an exclusive large Baku Core included, pop open into Baku-Action! POP OPEN TRANSFORMATION: Transform your Deka Bakugan into battle-ready mode! Drop it onto the large Baku Core and watch your Bakugan pop open in an epic transformation! BATTLE WITH INCLUDED CHARACTER CARD: Use the included character card in the Bakugan trading card game to defeat opponents and become the ultimate Bakugan Master! COLLECT THEM ALL: Level-up your battles with the all-new Platinum Bakugan action figures! Experience these powerful Bakugan as these surprise toys take on new shapes and transformations!